Hey, guys! I feel as if it’s finally time this week to own up to a weight that I’ve been carrying around with me for a long while: sometimes I blame myself for not being able to walk anymore. I’ve written this post numerous times over the past few months – sometimes blinded with fury, sometimes with tears dripping from my eyes – but I feel like I’m now brave enough to share with a clear heart and mind. And writing it all down is usually my last step in accepting and letting go.

I came to the shocking realisation yesterday that I’ve never had a dream where I’ve been in a wheelchair. If you know me, you know that I have very vivid dreams and that I dream every night. Yet still, I’m always walking in my dreams. I spent the majority of my life being able to walk and I think that it must take longer for your brain and subconscious to come to terms with these sorts of things. I became a permanent wheelchair-user when I was thirteen. That same year I used to have a recurring dream that I was running through a field and that I was extremely happy. While I was asleep, I would always wonder why running through the field made me so happy. Then I’d wake up and it would hit me.

I’ve talked before about how scary progressive disabilities like mine can be, but losing the ability to walk wasn’t like the other abilities I’ve lost over the years. It wasn’t like when I woke up one morning to discover I had suddenly lost all motion in my right hand – it was a gradual process. A battle. A warfare. One that I ended up losing:

The Process of Losing The Ability to Walk

The doctors told me I would have to be in a wheelchair permanently at age six but I was always good at ignoring them and ended up walking for many more years than they predicted. When I was eight, I received my first wheelchair, “for when you get tired” they told me. I was a child and it was fun, so of course I used it much more than I needed to. I would sit in it whenever possible and do wheelies and tricks in my mother’s classroom before school. Walking wasn’t an issue yet, so in the beginning, I mostly viewed my wheelchair as a toy I sometimes played in.

I used to fall occasionally when I walked because my walking wasn’t perfect. I was used to it though and made little fuss about getting back up afterwards. I’d been taught the correct way to fall without injuring myself and how to safely get back up again.

Then I graduated Primary School and the Secondary School I went to was scared of me walking so they said I had to stay in the wheelchair permanently while I was there. I’d get told off if I left the chair, even though I was fine without it. The thought of me getting hurt frightened them. I’d been able to deal with walking all of my life and was confident in my ability to do so. I knew I could handle everything else that came with it. But there was no element of trust between me and the disability specialist at school and they weren’t willing to take that chance.

I’d never been forced to stay in the wheelchair for so long before. According to Wikipedia: Patients with CMT (an umbrella term which my condition fits under) should avoid periods of prolonged immobility, such as sitting in a wheelchair for a long time, because it can drastically accelerate symptoms of CMT. Obviously, everything started to happen much faster after I had to spend all day sitting in my wheelchair at school. Losing the right to walk during the day meant that I had much less practise with it and was a big contributing factor. It angers me that the disability specialists at school took that practise away from me.

Things got even worse when I went to a doctor’s appointment one day and the doctor told me that it was dangerous for me to walk. I burst out crying in their office after hearing this. Up until then, I’d gotten used to ignoring doctors when they said I shouldn’t be able to walk. This time though – I started to believe them. I began walking less and less at home because I was irrationally afraid of slipping (even though that never used to be a problem before). The combination of not being able to walk at school and walking less at home was a dangerous one. I’ll never forget thinking to myself one day: “You know what? I don’t really need to walk anyway. I have my wheelchair.” And that was it. For the first time ever, I pulled my punches. I gave up.

The Last Steps I Ever Took

I clearly remember the last day that I ever walked because it was Halloween. Instead of celebrating Halloween, my church celebrates something called a Light Evening. I was at the church reluctantly helping out by setting up games for the children when I’d really rather have been at home. At that point, I already hadn’t walked for weeks and presumed that I had lost the ability. But that day I suddenly realised I was able to walk if I leant on my wheelchair and pushed it along like a walker. It was because the church had a carpeted floor. This was the solution I’d been searching for: I could walk on carpet! Carpet also meant my irrational fear of slipping would disappear.

I remember feeling so full of hope and happiness that day. I was already missing the ability to walk and didn’t feel ready to let it go just yet. I immediately told my family members and we discussed possibly changing the floors at home to be carpeted. I had dreams of forcing myself to practise my walking every day at home so that I could build the muscles back up again. I could do it. I could hold on and fight a little harder. I didn’t have to lose yet another function.

And that was it. There was no follow-up. I never explored the idea further or anything, and after a few days, I had forgotten it had even happened. True to the nature of my disability, the continued inactivity caused the muscles in my legs to further deteriorate and curl in on themselves. Soon, it became impossible for them to straighten out so that I could use them to walk.

I feel like I should have held on tighter. Fought harder. Ignored the doctors and kept walking without being afraid. Pushed back more against the school for banning me from walking when I had every right to. For years I’ve blamed myself. I never believed anyone when they told me it was a progressive disease and I was bound to lose the ability eventually. That’s what the doctors were always saying and they were wrong before. It was because I gave up.

But now I’ve won the biggest battle I’ve ever had to face: accepting myself and my disability. Letting go of the past. Starting to realise that I was only twelve when most of this happened, I wasn’t perfect, and it wasn’t all entirely my fault. I finally love myself despite suffering from depression numerous times and telling myself every day: “you’re a waste of space.” And this time I didn’t pull my punches. I won. Even though it was one of the toughest things I’ve ever had to do. Despite all of this, I’m still just a teenager and I still have my entire life ahead of me.

It hurts to think that I could’ve ended up walking for much longer if everything hadn’t happened as it had. But I still wouldn’t change who I am now. I’m strong and I’m fighting every day to make a difference. The battle for myself is over, but my battle for the disabled community has just begun. In two days, I’m going to be speaking at a school again to educate their young students about disabilities. And next week I plan on sending a few emails to some pretty important people. Hopefully one of them will reach out in return and help me to start making a change. Thank you so much everyone for joining me on this new journey.

To read more about my story and the gradual progression of my disability, check out Learning to Write With a Pen in My Mouth and my My Journey Series. Thanks so much for reading ❤ I might not post next week because I’m taking a few days off to visit the school to perform the educational talks, get vaccinated, and hang out with a friend. But I’ll still be active on WordPress to read and comment on all of your wonderful blogs. See you later!

Published by The Wheelchair Teen

I am a black, disabled teenager and my blog shares my personal experiences, some of the struggles and triumphs I’ve been through, as well as posts that educate people about disabilities to help end discrimination against disabled people. View all posts by The Wheelchair Teen

94 thoughts on “The Last Steps I Ever Took” 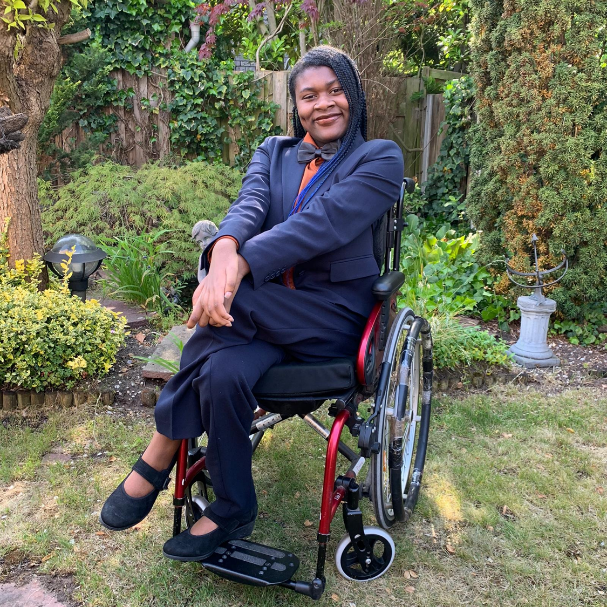